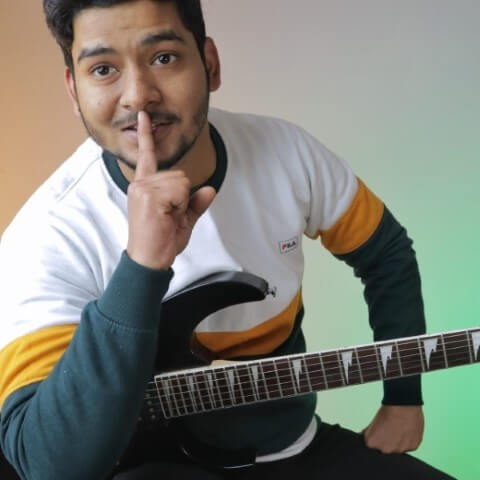 Learn How to Play Guitar Online

This series of beginner guitar lessons was created specifically for individuals of India who are new and want to learn guitar. To get started, you don't need any prior experience with chords, fretboards, etc. For both acoustic and electric guitar players, all of the fundamentals are covered.

It's best to start with the first video and work your way through them in the order they're presented. From there, you'll learn how to carry the instrument, the guitar's numbering systems instructions, the parts of the guitar, the names of the strings, training for how to tune, how to strum, posture, and more, your first guitar chords, two more guitar chords, how to perform your first tune or song, musical strumming tricks, guitar lessons, and next steps.

Let's take a look at some of the most often asked questions.

Yes, it's possible. An organized course is the best approach to learn guitar. YouTube provides free content but is not the ideal place for a newcomer to start because it does not provide an organized path.

Because highly certified and experienced guitar teachers have taken all they've learned from themselves and from teaching others and placed it into an organized course for others to learn guitar.

Yes, you can learn by yourself

This will be challenging if you view learning guitar "on your own" as listening to songs and then attempting to interpret what they are playing from start with no musical knowledge and then replicating it on a guitar.

However, those were the days when you had to do that in order to learn to play guitar.

You can learn to play guitar on your own if you think of it as learning with a pre-recorded structure. It's a straightforward process of following the steps laid out for you, and anyone can accomplish it if they put in the effort.

How long will it take, though?

Whatever your guitar goals are, you'll need to start with a fundamental course of study to lay the finest foundation.

Use this step-by-step program. It offers an organized learning method that takes you from the first time you pick up a guitar to being able to play hundreds of tunes.

It is not as difficult to learn to play the guitar as it is to purchase one. There are so many models on the market in a fair price range that it can be difficult for consumers to choose the correct one. It's always best to figure out what kind of guitar you're looking for first. Acoustic guitars are a good choice for beginners because they are powered by hand and have basic functions. On the other hand, electric guitars are very technical to play and cannot be done without proper instruction. Acoustic guitars are pick-and-play instruments that don't need an external amplifier to sound better. On an acoustic guitar, you can practice anywhere you want.

Guitar playing appears to be easy. However, when you get started, you'll notice that this isn't for everybody. To play it well, you must pay attention to and understand the different scales. Don't be concerned if you are a beginner. We'll teach guitar to on how to read and how to play guitar scales easily.

Six vertical lines make up a scale diagram. The E strings are represented by the two extreme lines on the right and left, with the higher E string on the right and the lower E string on the left. The A, D, G, and B lines (from right to left) are represented by the inner lines. Numbers may also recall information. The letters, on the other hand, help to identify the scales as normal (for instance, G major, A minor, etc.). The horizontal lines represent the guitar frets. Aside from the row, the scale diagram contains circular dots with numbers on them. These numbers serve as a reference for where you should put your fingers on the guitar. It implies that you must actually assign a finger for each fret. Some of these dots may appear to be different from the others. They can be illuminated with a distinct hue, shadow, or a filled backdrop, as seen in the diagram. The primary notes on a scale are represented by these dots, which are referred to as the 'root'. The root is usually found on the lowest note, but there are always exceptions. Some scales have their origin on the inner strings, while others have a higher tone.

To play the simple version, pluck the right strings with your thumb and the fourth string with your forefinger. You can easily put your second finger on the fifth string, and your third finger will be on the highest chord. This may be the result of your fingers resting comfortably on the strings. You should progressively learn and repeat it to make it fluent.

After you've completed your daily exercise, reverse the order to pull strings of various variations. This will allow you to sample some of the various beats' experiences and innovations.

This style is mainly used in folk music, but it can also be used in rock, where two beats are split into three shorter beats. To make a good composition, follow the steps outlined above, with the exception of when you reach the sixth string. After running the sixth string, reverse the position of the strings by picking the fifth string with your second figure and moving it to the fourth string with your forefinger. You can alternate the bass notes you played with your thumb with this pattern.

Because of the identical beats at the beginning of the album, the pattern is named after Leonardo Cohen's song "Suzanne."

You must pick up two strings at a time and move on to the next in this pattern. String one and six together, then repeat the sequence two, five, one, six, and three times more. Just two strings come together here, and the rest will be added one by one. It makes no difference which fingers you use to pull the chords; what matters is the smooth motion. So, after every second note, make sure you're making the right step with your thumb to alternate between three bass notes.

How To Learn Guitar Tips

Even if you have prior guitar experience, this guitar course will still be beneficial. These will allow you to review the fundamentals before moving on to the next lesson.

Students can gain an understanding of the instrument's structure, components, and accessories, as well as basic maintenance, by the end of this guitar course. An electric guitarist can learn how to use their instruments, as well as the basics of amplification, effect pedals, and sound effects. Students can also learn how to improve their methodology and apply theoretical principles to their personal games.

Hey, my name is Dipanshu Joshi. I run a youtube channel with around 1 lakh subscribers and thousands of followers on other social media. I am here to teach you Guitar from the beginning to the advanced level, through my well-designed detailed Guitar course of 109 videos.

Learn to Play the Bansuri: Beginner Basics to Intermediate