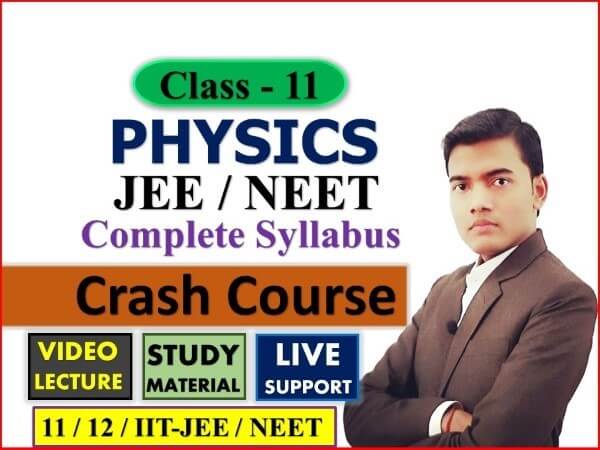 This Physics Crash Course is designed for students in Class 11 who are preparing for the IIT-JEE or NEET exams. This course was created by analyzing problems that students had repeatedly in order to revise and prepare the physics chapters(syllabus). Enroll in this online crash course for class 11 Physics, which includes recorded video lessons specifically designed to help you grasp all definitions, formulas, principles, questions, topics, concepts, and to help you to score good marks in the examination.

This course includes video lessons for each chapter of Physics Class 11th Crash Course 2020-21, as well as practice questions at the conclusion of each lesson. Graphics, presentations, and interactive features are included in these video lessons to keep students engaged. A broad variety of online study material with a user-friendly interface for CBSE board students. You can access a lecture several times if required and ask your questions directly to the instructor.

Unit I: Physical World and Measurement:

The scope and excitement of physics; the essence of physical laws; Physics, technology, and culture are all intertwined.

Motion in a straight line, frame of reference: Speed and velocity, as well as a position-time graph.

Differentiation and integration are basic principles for describing motion. Motion that is both uniform and non-uniform, as well as average and instantaneous velocity. Motion graphs with uniform acceleration, velocity-time graphs, and position-time graphs.

Position and displacement vectors; general vectors and their notations; equality of vectors; multiplication of vectors by a real number; addition and subtraction of vectors Relative velocity is a term that refers to how fast something is moving Resolution of a vector in a plane - rectangular components; unit vector Vector scalar and vector product.

Projectile motion in a plane, cases of uniform velocity, and uniform acceleration. A circular motion that is consistent.

The law of linear momentum conservation and its applications.

Concurrent forces are in a state of equilibrium. Friction, static and kinetic, laws of friction, rolling friction, and lubrication.

Kinetic energy, work-energy theorem, and power are terms used to describe the work performed by a constant and a variable force.

Unit V: Motion of System of Particles and Rigid Body

The radius of gyration, the moment of inertia For simple geometrical objects, values of moments of inertia (no derivation). Theorems of parallel and perpendicular axes and their implementations are stated.

Planetary motion according to Keplar's rules. Gravitation is a fundamental law.

Gravitational acceleration and how it varies with altitude and depth.

Pascal's law and its applications; pressure due to a fluid column (hydraulic lift and hydraulic brakes). Gravity has an impact on fluid pressure.

Stokes' law, terminal velocity, streamline and turbulent flow, critical velocity is all terms used to describe the viscosity of a fluid.

Stokes' law, terminal velocity, streamline and turbulent flow, critical velocity is all terms used to describe the viscosity of a fluid. The theorem of Bernoulli and its implementations

Surface tension and energy, angle of touch, pressure excess over a curved surface, and application of surface tension ideas to drops, bubbles, and capillary rise

Reversible and irreversible processes are described by the second law of thermodynamics. The engine and refrigerator should be heated.

Work performed in compressing a gas, equation of state of a perfect gas.

Time length, frequency, and displacement as a function of time are all examples of periodic motion. Periodic functions are functions that repeat themselves.

Simple harmonic motion (S.H.M.) and its equation; phase; oscillations and force constant of a spring-restoring force; energy in S.H.M. Easy pendulum derivation of expression for its time period; kinetic and potential energies.